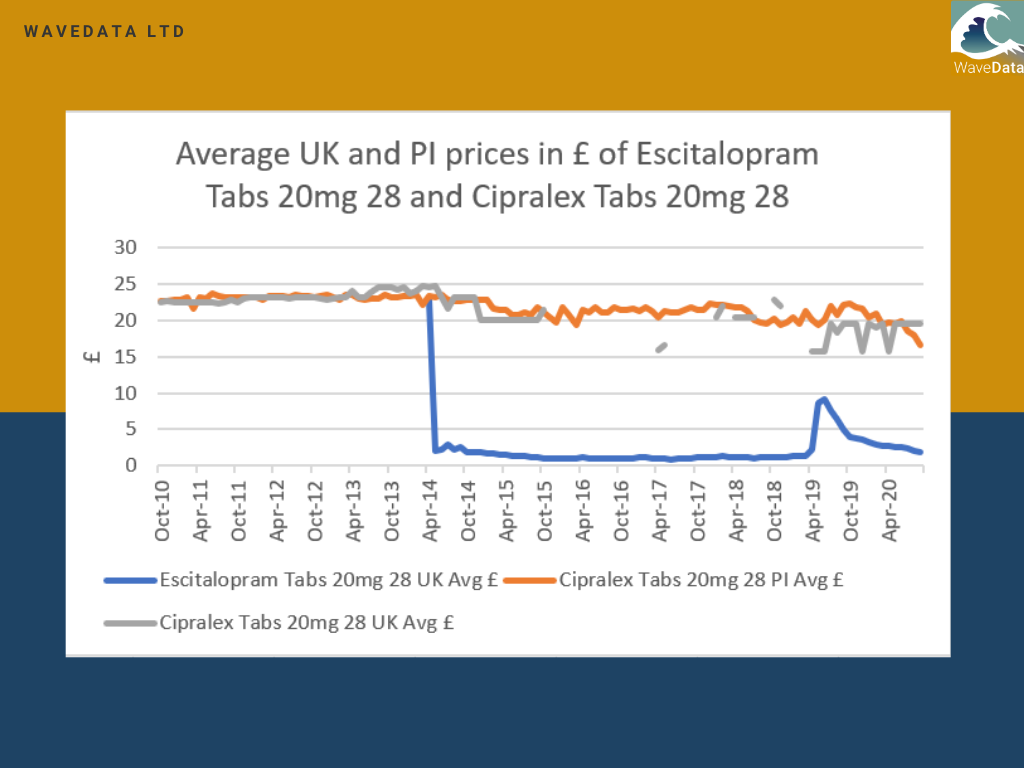 Escitalopram 20mg 28 Tablets was launched in May 2014 in competition with Lundbeck’s brand Cipralex.

At launch, the competition for generic market share was intense with lots of competing companies forcing the average Escitalopram retail price down from the normal price of above £22.00 to around £2.00, almost instantly.

Over the next four years, the average generic price remained stable. Then in June 2019, a supply disruption caused the market price for the generic to rise and meant a NCSO concession price was granted. Fortunately, the originator manufacturer stepped up production of Cipralex to supply to the UK market and fill the gap left by the generic shortage.

It is also worth noting the extent to which the parallel import continued to be bought and sold in the UK after the generic was launched. The PI price remained more or less stable over the last six years, but it is now beginning to decline. Normally, the market share for the originator brand gradually dries up as GPs switch to prescribing generically. The parallel import of this particular product is quite persistent but, will disappear at some point. Normally parallel imports appear a couple of years after the launch of the brand and persist until some years after the generic has appeared on the market. The amount of parallel imported products on the UK market depends on the exchange rate £/€ and the difference in brand price across Europe.

With the UK supply of Cipralex restored to some extent, after the generic hiccup, it should see the market through any supply disruptions which Brexit may bring. Customers will have a choice of generic, UK brand and parallel import to choose from if supply becomes an issue.

The long-term price history came from BPPI and the current data from September came from WaveData Live which can all be accessed from wavedata.co.uk/login